Raise the Roof: Can You Lay New Shingles Over Old? 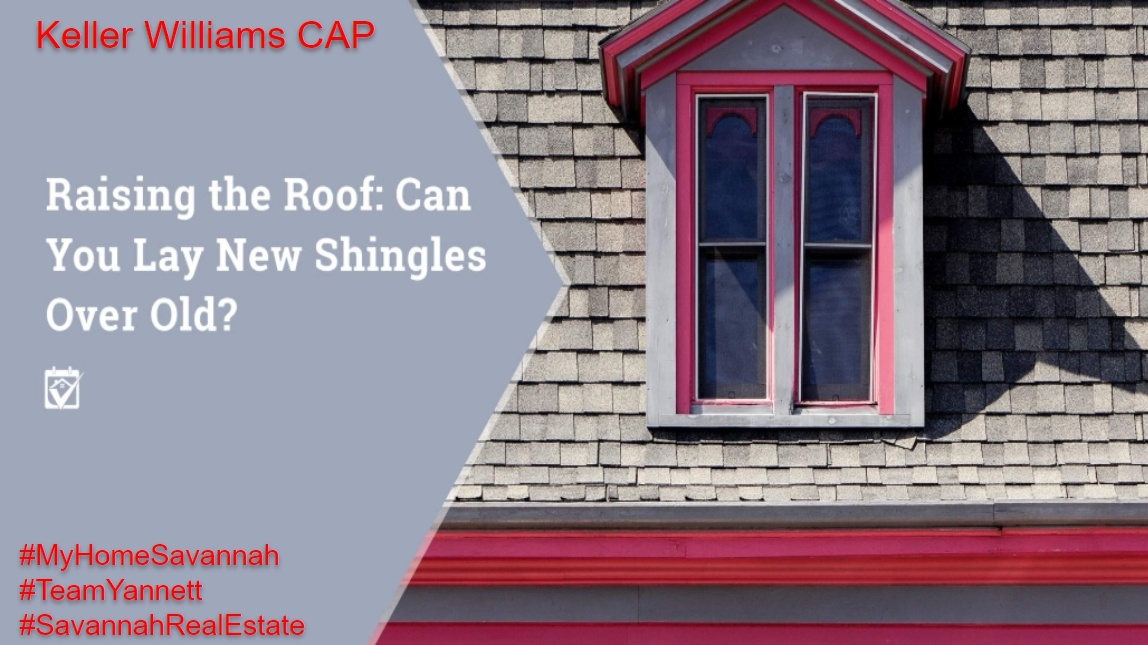 A house is more than just four walls and a roof (it has way more than four walls, for starters), but when your roof springs a leak, shingles start to blow away or age has just gotten the best of it, all you’re thinking about is that roof. You may ask yourself a few very serious questions, like “how am I going to pay for this?” and “what are my least expensive options?”

Pros and Cons of Re-roofing Your Home
First, a few terms to clarify any confusion. “Re-roofing” is a term that specifically applies to homes that have one or more layers of existing shingles and then have another one added to the pile. A roofing job that starts by removing all the old shingles is a “tear off.”

Homes are re-roofed every single day. There are plenty out there with several layers of shingles and the roof still functions more or less just fine. The houses underneath aren’t buckling, so it’s all good, right? Depends on the situation. This is a short list of pros and cons for choosing a re-roofing job:

Pro: Easier than a tear off. Re-roofing literally consists of climbing on the roof and putting new shingles on top of whatever is there. Instead of the ripping, tearing and banging lasting days, a re-roof is done in a fraction of the time because it’s so much less complicated.

Con: Re-roofing can cover up major roofing defects. Tear-offs are more involved, it’s true, but by removing all the old shingles, your roofer can more easily locate defects and replace decking that’s been water damaged. This is also a good time to correct problems like incorrectly installed drip edge and to flash chimneys, exhaust vents, and other vulnerable areas.

Pro: You can save a lot of money. Less labor generally means less cost, and it certainly applies to a re-roofing job. You won’t need to pay for the removal and disposal of your old shingles because they’re not going anywhere and the lower number of man hours keeps the cost way down.

Con: Your new shingles will likely not last as long as promised. Although some people claim that your roof will be just fine with an extra layer, the truth is that the only time that really applies is when the shingles below are perfectly flat, and even then they will likely have a shorter lifespan than shingles that are part of a tear-off job. The extra layers of asphalt (that stuff they fill potholes with is also what the majority of shingles are made of) cause the roof to get hotter than it would with just one layer, breaking down both old and new shingles faster. Some roofers assert that layered shingles have life spans shortened by as much as 40 percent.

Subtle Issues to Complicate Things
When you need shingles for your roof, it’s best to get several quotes from different roofers. They’re going to give you the best idea about what is possible with the budget that you have. Because you can often lay other roof types over an intact asphalt shingle layer (for example, a metal roof over an asphalt one) without issue, it could be cheaper to go that route and avoid a tear-off entirely. But, this is only something your expert can tell you for sure.

Other things to consider when pondering the re-roofing issue include:

Resale potential. A house that has a lumpy roof is going to catch a lot of attention, even if that lumpy roof is brand new. It’s also going to show up on the inspection report, causing jittery buyers to run the other way. You might then be forced to settle for less for your home to simply be able to move on.

Local building codes. Many municipalities have building and fire codes that address shingles and the layers allowed. Generally, two are permitted before a tear off is required. This isn’t because your local government is evil, it’s a safety issue for you and your home. Houses aren’t really built to support thousands upon thousands of pounds of shingles. Oh, and extra shingle layers can pose a serious hazard should a fire break out.

Glossing over serious damage. Re-roofing can sometimes turn into a bandage on an infected wound. There’s damage under the surface, but you can’t tell from all indicators. Even when roofers walk the roof looking for soft spots, they’re not stepping on each square inch, nor are they going to be able to tell that an area that still has some amount of integrity is badly damaged and will rot through in the near future. What you end up doing is covering up decking that could be bad or tar paper that’s shot (it helps protect your roof decking from water).