16 Of The Most Annoying Things Diners Do 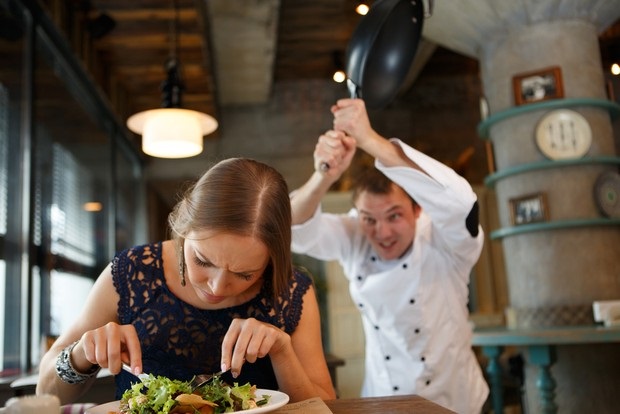 I thought this was a funny article!  Some of these kinda hits home because this is how i paid for my college education, waiting table and bartending!  Enjoy the read!

"Nothing makes your heart drop like getting sat at 9:45 p.m. when the restaurant closes at 10:00 p.m." Members of the BuzzFeed Community told the most annoying things restaurant customers do without even realizing it.

1. Throwing full beverages into the garbage not realizing someone has to take it out.

"People would never finish their drinks and just toss them into the trash which caused leaks. The whole thing was so heavy that we would have to use a dish bucket just to carry it."

2. Assuming the server remembers you from the last time you came in.

"People would come in and expect me to remember who they are and what they ordered. What made it worse was when they get offended that I didn’t know."

3. Demanding free bread as soon as you sit down at your table.

"I hate it when people immediately ask for bread or rolls as soon as I greet them. At my restaurant we bring out the bread with the salads, not the drink orders, and surely not before I greet you."

4. Coming in 15 minutes before the restaurant closes...

"Nothing makes your heart drop like getting sat at 9:45pm when the restaurant closes at 10pm — and nothing puts you in a blacker mood than having a table that just won't leave."

5. ..Or camping out long after the restaurant has closed.

"My mom owned a breakfast restaurant that closed at 10:00 a.m. A group of older men would always come and stay past closing — the last person staying until noon sometimes. I hated it so much. It wasn’t so bad if they left before we were done cleaning up, but a couple of them would stay so long we’d just be waiting for them to leave so we could. "

6. Completely disregarding your server by immediately ordering drinks instead of greeting them.

7. Asking your server to make your drink "strong."

"We are not friends. And that dollar you're about to tip means nothing to me. If you want a strong drink, ask for a double. Don’t ask a person you don’t know to risk their job to give you something for free."

"Questioning the strength of your cocktail is a sure fire way you get put at the bottom of the list in my rotation of service."

8. Telling your server to smile.

"If one more customer tells me to smile more..."

9. Not pushing in your chair after you leave.

"PUSH IN YOUR CHAIR! We all learned this in kindergarten, this should be like a no brainer."

10. Not tipping properly when you use a gift card or order off a happy hour menu.

"NOT TIPPING ACCORDINGLY AFTER USING A GIFT CARD. TIP OFF THE ORIGINAL TOTAL YOU IGNORANT MONSTERS."

"If you go out during a happy hour, whether for drinks or for food, tip on the original bill before the discount! This should be the norm and is something that really screws servers over when overlooked."

11. Complaining to your server about additional charges for extra ingredients.

“What do you meeeeean it costs extra to get grilled chicken on my pasta?!"

12. When parents don’t pay attention to or allow their children to open multiple sugar packets and pour them on the floor without attempting to clean or at least leaving a 20% tip.

"When parents don’t pay attention to or allow their children to open multiple sugar packets and pour them on the floor. Along with that, letting your kids trash the table and surrounding area without attempting to clean or at least leaving a 20% tip."

13. Parties of 10 who walk in and expect a table without calling ahead.

"It takes time to prepare a whole section for you, so just call and give a heads up! Your server will be a lot more prepared for you that way, especially if you're coming in during peak hours." -Viciousxvenom

14. Seating yourself instead of waiting to be seated.

"WHEN THE SIGN CLEARLY SAYS 'WAIT TO BE SEATED' AND THEY SEAT THEMSELVES!"

15. Breaking a glass and not telling anyone.

"People that break something or spill a drink and don't say anything are the worst! I don't want to be closing up at stupid o' clock in the morning and find a broken glass that you've stashed in the corner under a table!"

16. Telling a host that you see "open tables" available as you're waiting.

"When customers come in and get put on a waitlist, then proceed to look around the restaurant and say 'I see empty tables'. THERE'S A REASON THE TABLES ARE EMPTY, PEOPLE!"